Photo: daughter and her parents

Attending the protest were Andrew Hayes, a member of the Lakeside Union School Board, as well as Anthony Carnevale, a real estate agent and community activist who is now spearheading the community outcry over the placement of sex offenders in their community and the unraveling the behind-the-scenes orchestration of placement. Also present was Patrick McMillan of the McMillan family, who is also a resident and an activist who has done a lengthy investigation of the placement. 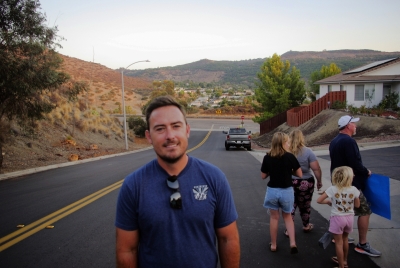 Residents noticed a lot of activity at the house for several months, including many people coming and going as well as construction work. They searched the Megan’s Law website and saw that sex offenders released after convictions for many types of sex crimes were registered at the address.

This reporter sent media messages to the five county supervisors, as well as State Senator Brian Jones, Congressman Randy Voepel and Congressman Darrell Issa. Joel Anderson, whose district includes the property, did not respond. Supervisor Nathan Fletcher, who is not the District 2 supervisor, told me that a staff member would contact me within a week, but that did not happen. Senator Brian Jones recently sent a brief message acknowledging the problem and his commitment to working to find solutions. At an earlier protest, Mayor Wells of El Cajon spoke out, despite having no authority in the unincorporated El Cajon, but supporting residents, pledged to dialogue and meet with anyone, including supervisors or anyone they can help.

Who owns this house? The deed lists Natalie Casillas and her sister Nicole Casillas under Mountain High Construction LLC. Nicole is a Coldwell Banker-West Realtor in Chula Vista. New Lyfe Homes is the placement agency for offenders. Recently, Nicole Casillas sent a cease and desist letter to Haynes and Carnevale and their respective school district superintendents. The letter called the protesters a “racist mob”. 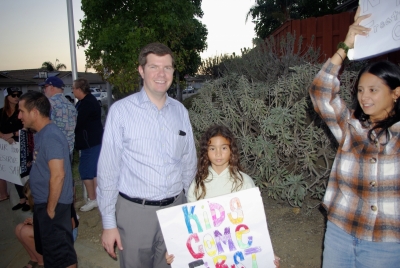 I first spoke with Anthony Carnevale and asked him which county official helped the most. “I don’t know if an elected official helped us, but a code enforcement officer is supposed to come out,” he replied. Asked what next steps community members are planning, he replied, “Great question. Imagine how to keep the pressure on,” adding, “I believe the protests have resulted in the departure of three offenders. ECM could not independently verify why some offenders moved elsewhere.

The state of California approves SVP placements, which must be placed in the county they come from, and the state is required to notify neighbors and there is a public comment period before a judge approves or rejects the placement. With other sex offenders, there is no formal public notice to the community. 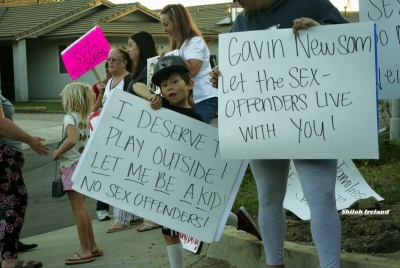 Photo, right: a boy and his parents during a demonstration

“We should be proactive in protecting our children and we need legislation to address this issue,” Hayes said.

Haynes and others have launched a landmark initiative to expand Jessica’s Law protections, create sex offender committees in schools, require 1-5 security ratings for sex offenders – 5 being the worst – and demand that the school district be informed. before placement. The petition will go to Governor Newsom.

Hayes has this advice for community members: “Keep fighting; it’s popular and we need to change the law.

Oakland, California Teachers, parents, students, education workers and community activists are launching a multifaceted campaign to end school closures that have been mandated by the Oakland School Board and the Oakland Unified School District. ‘Oaklands. All last-minute attempts to block or postpone school board shutdown actions have failed, leaving mass organizing, recall efforts and a […]

The cover of “A Man of Wit”. Former Rockville Center rabbi Dr. Barry Dov Schwartz worked alongside a Nazi hunter. He marched for civil rights in Washington, DC He served as a chaplain during the Vietnam War. These stories and many more of his exciting adventures and experiences are chronicled in his new book, “A […]

‘Your community supports you:’ College, career support in City Heights

San Diego organizations and leaders came together Saturday to provide City Heights residents with much-needed support at a college and career fair. Held at Herbert Hoover High School, “The Village United” fair featured various academic and professional workshops and resources on basic needs for high school students, as well as adults hardest hit by the […]