Olivia Julianna, a 19-year-old activist in Houston, raised over $300,000 for abortion funds across the country. The campaign, which has gone viral on Twitter, is the result of comments from Florida rep Matt Gaetz. After Gaetz poked fun at Julianna, she announced that she had started fundraising for abortion funds “in honor of Matt Gaetz who publicly shamed me.” As donations poured in, she documented the progress using the hashtag #MattGaetzIsTriggered. In less than 48 hours, she had raised hundreds of thousands of dollars. It’s a great reminder that social media is one hell of a fundraising tool, especially for associations, and a way to turn the cruelty of social media into a force for change.

Here are today’s other top stories:

Murder hornets have a new name, and for good reason

The insect informally known as the “murder hornet” has a new name: northern giant hornet. The Entomological Society of America (ESA) and the Entomological Society of Canada adopted the new name to avoid feeding anti-Asian prejudice. The species is native to Japan, Korea, Taiwan and other parts of Asia, and was commonly known as the Asian giant hornet. In 2019, the hornet hitchhiked across the Pacific and was spotted in British Columbia. In 2020, the Asian giant hornet earned the nickname “murder hornet” after reports of its excruciating sting emerged.

The words “Asian” and “giant” bothered Chris Looney of the Washington State Department of Agriculture. (Not to mention the “murder hornet” moniker.) “‘Asian’ is neutral and uninformative at best,” he said. “At worst, connecting Asia and a nervous insect breeds racist fears.” The name change is in line with new guidelines that ESA adopted in 2021. The guidelines prohibit racial and ethnic names and discourage the use of geographic region names, especially for invasive species.

Although the description “Asian” is not pejorative in this context and is geographically accurate, its association with a creepy-sounding insect may inspire fear. With Anti-Asian crime on the risethe change in language can help eradicate anti-Asian sentiments.

Tweets about health and wellness are on the rise. from Twitter latest trend report found that Twitter users are increasingly looking for ideas on how to improve all aspects of well-being. Popular topics included dieting, work-life balance and mental health. Last year there were over 1.4 million tweets about mental health, suggesting that the way we talk about mental health is shift. 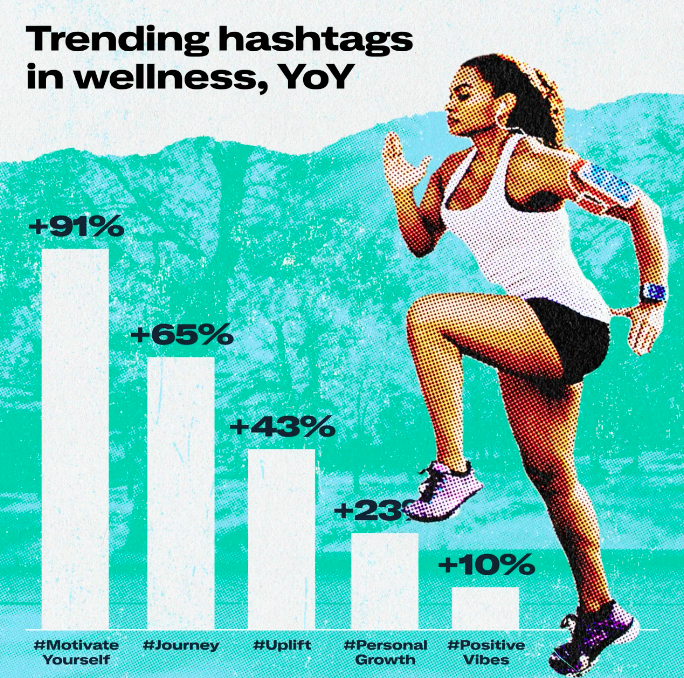 The report also found that men make up nearly half (49%) of the wellness conversation. That said, men and women have different conversations. The most popular topic for men was dieting, while the most popular for women was work-life balance.

billy, a shaving start-up, wants to change the perception of body hair for the next generation. His latest campaign Body hair rules, includes a children’s book. It’s meant to give kids a positive introduction to body hair, what it does, where it grows, and how it can change as you grow. Georgina Gooley, co-founder of Billie, explained:

When we ask people when and why they started shaving, most say that at some point in their childhood they were ashamed of their body hair. We wanted to help stop the shame before it starts by giving kids a positive introduction to body hair, so the next generation knows that what they do with their hair should be their choice, not because someone one told them.

While the campaign seems counter-intuitive for a brand that makes its money from shaving projects, Billie thinks it’s the right thing to do. The company wants to erase the stigma associated with “unwanted” hair and that the decision to forego shaving is not embarrassing. The campaign also has the potential to attract other consumers looking to buy lotion and soap. “We want to be a brand for all women, not just for those who shave” goley said.

Why it matters: Billie’s new campaign is a great example of person-centered marketing. It focuses on consumer needs and potentially relieves a pain point. (In this case, embarrassment about body hair.) The campaign also encourages body positivity and helps young audiences think critically, instead of accepting outside pressures and expectations.

Dawn Olsen is a writer who went to engineering school out of state (Purdue University) to get an English degree. She has lived in Indianapolis for 10 years and spends a lot too much time on twitter. In fact, she’s probably thinking about Twitter right now.

Just over a week ago, the Royal Ice Cream Company announced a somewhat limited recall of its Batch Ice Cream due to Listeria contamination. On February 12, the Food & Drug Administration (FDA) shared an advisory from the company, expanding this recall. This initial recall only included three flavors within the Batch Ice Cream family. […]

Protesters rage against French company for stay in Russia

A company based in the United Arab Emirates has been heavily criticized since Wednesday for a job posting posted on social media. The advert is looking for Security Officers for GBMT Steel Services, which is based in the United Arab Emirates. The announcement specified that “only Hindu candidates can apply”. Unsurprisingly, the clause caused an […]