PANJIM: A day after the Karnataka Legislative Council passed the controversial Karnataka Religious Freedom Protection Bill, known as the Anti-Conversion Bill, in Goa, legal luminaries believe that such a law is “not relevant” to the coastal state.

The bill passed despite opposition from Congress and HD Kumaraswamy’s Janata Dal-Secular. The opposition said such a law would undermine the freedom of religion granted by the Constitution.

The government countered that the law would only protect people from forced conversion, saying it was becoming more common.

Many legal experts have argued that the bill is designed to restrict a person’s “freedom of religion” rather than protect it.

According to the Karnataka bill, “no one shall convert or attempt to convert, directly or otherwise, another person from one religion to another by resorting to misrepresentation, force, undue influence, coercion, lure or by any fraudulent means or by marriage, and no one shall encourage or conspire for conversions”.

Three months ago, Goa also saw debate over the anti-conversion law after Chief Minister Pramod Sawant hinted at the introduction of “a strong law to punish those involved in illegal religious conversion and forced”. The statement came following the arrest of Pastor Domnic D’Souza and his wife from the Five Pillars Church in Sodiem village, North Goa, for allegedly converting people. However, no evidence of cases of forced conversion has been found.

When Herald spoke to some of the legal experts, they were clearly of the view that the anti-conversion law is irrelevant in states like Goa where people live in harmony and there are no cases of forced conversion. has never been reported.

Adv Cleofato Coutinho said any attempt in this direction can lead to unrest in society and disrupt community harmony. “In the current situation, we see no need for such a law in Goa as there are no forced conversions. Why should we introduce a law that is irrelevant and can cause unrest? ” he said.

Coutinho said Goa needs an anti-superstition bill, to root out the kind of black magic, which takes place in the state.

Former Union Law Minister Ramakant Khalap says the debate is unwarranted given that in Goa no political party has ever spoken of forced conversion or passing an anti-conversion law . “The Chief Minister spoke once because there was an arrest. But then there is nothing. Why just rake this problem? he reacted. 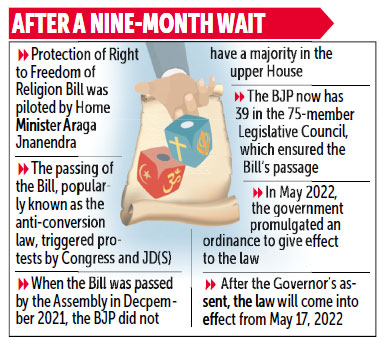 Former MP and prominent activist Adv Radharao Gracias is of the view that not only in Goa but there is no need for such a law in any state in India. “Our Constitution has given the right to every individual to practice and propagate the religion of his choice. And if there are forced conversions, that too is catered for by the Indian Penal Code (IPC),” he said.

Gracias believes this is just an attempt to harass Christians. “The BJP’s agenda is very clear…harassment of minorities, and this law is one of them,” he said.

State budget: Greens say no to the promotion of coal-based electric vehicles

By Kaushik Bhattacharya: Despite the positive reception of the government’s stance on environment-related issues, campaigners and experts said more funds are needed for environmental conservation Although the government of Maharashtra in its 2022-23 budget has emphasized its electric vehicle (EV) policy, green activists and experts have claimed that the electric vehicle policy will only succeed […]

By State Representative Viola Davis (D-Stone Mountain) The recent education crisis within the DeKalb County school system requires an objective eye, moral fortitude, and moral integrity to bring a solution to my constituents. I fought to put our children first and held our local school system accountable for over 20 years and will continue to […]

Florida infant confirmed to have monkeypox, youngest in state with virus | app

The United States Centers for Disease Control & Prevention released details on Monday of how an infant in Florida contracted monkeypox and battled full bodily harm. The Brevard County child, diagnosed in August, is the youngest in the state to have the virus, although 27 confirmed cases of monkeypox in pediatric patients under the age […]