The Israeli maker and distributor of Ben & Jerry’s said Thursday it was suing the ice cream maker and its parent company Unilever for unlawfully ending their business relationship.

Last summer, Ben & Jerry’s announced that it would no longer sell its products in the “Occupied Palestinian Territory”, apparently referring to settlements in the West Bank and East Jerusalem.

Its Israeli distributor refused to comply, saying the move was illegal in Israel and the United States. Ben & Jerry’s has therefore declared that it will not renew the Israeli licensee’s agreement at the end of 2022, thus ending the commercial relationship.

The boycott announcement came after a strong pressure campaign from anti-Israel and progressive activists. The decision sparked an outcry in Israel and among some American Jewish groups, many of whom called it anti-Semitic, as the company does not have a boycott against any other region of the world.

The new lawsuit asks a US federal court to declare Unilever’s decision illegal and allow the Israeli company American Quality Products (AQP) and its owner Avi Zinger to continue selling Ben & Jerry’s products in Israel and in the West Bank. He also seeks a jury trial and damages.

The lawsuit argues that the boycott of the West Bank violates US and Israeli laws, and since there is no legal mechanism to continue business while violating those laws, the decision amounts to an illegal boycott of the entire country. Jewish State.

“I have refused illegal demands from Ben & Jerry’s and Unilever, and as a result, they are threatening to shut down my business, affecting hundreds of Israeli and Palestinian workers and distributors,” Zinger said in a statement.

The lawsuit was filed following the “unlawful demand by the defendants that the plaintiffs violate Israeli law by boycotting certain parts of Israel,” the lawsuit reads.

“The request was itself a violation by the defendants of Israeli law, the United States anti-boycott policy” and the laws and policies of many US states, he said.

The company filed the lawsuit in the US District Court of New Jersey, the state where Unilever’s US subsidiary is headquartered. It was also filed against Conopco, Inc., another US subsidiary of Unilever, a UK-based multinational.

AQP and its owner Zinger are seeking an injunction from the US court to allow AQP to continue its Ben & Jerry’s operations throughout Israel.

The lawsuit alleges that Unilever ordered AQP to violate two Israeli laws – the Israeli Non-Discrimination Law, which includes a prohibition on discrimination based on residence and place of origin; and an Israeli law prohibiting a boycott against Israel or an area under Israeli control.

The company also violated several US laws that block anti-Israel boycotts, as well as numerous state laws, according to the lawsuit.

“We expect the court to prevent Unilever from terminating my contract because the only reason it is doing so is that I refused to break the law,” Zinger said. 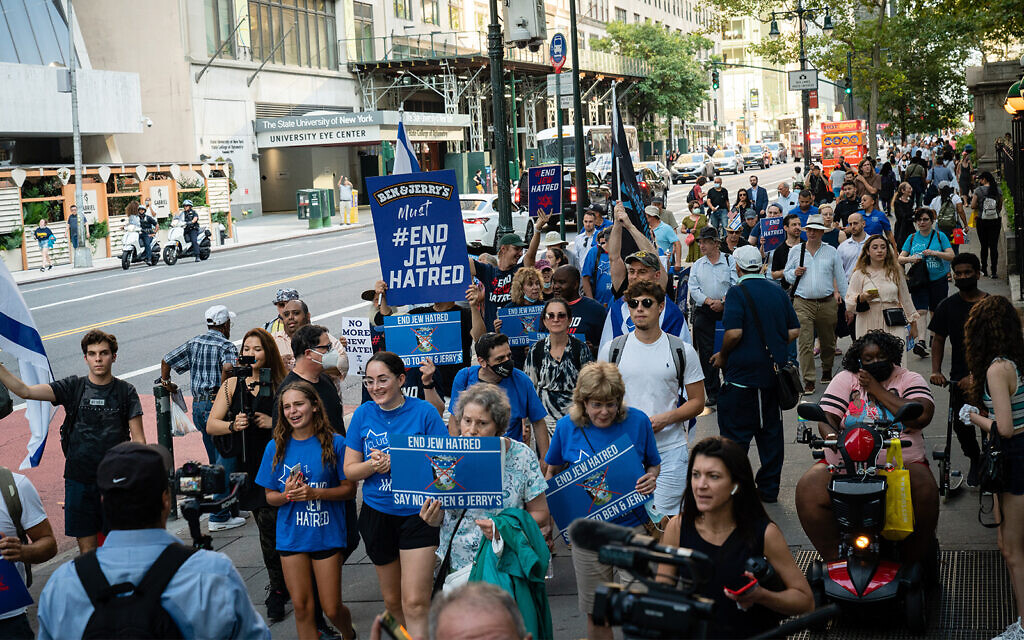 Pro-Israel demonstrators protest Ben and Jerry’s for its boycott of the West Bank and against anti-Semitism, in Manhattan, New York, August 12, 2021. (Luke Tress/Flash90)

The lawsuit says a party to a contract, especially the larger one, “cannot lawfully or in good faith compel the weaker party to violate the law as a condition of continuing the contract.”

It says AQP employs 170 people and works with Palestinian suppliers and distributors, all of whom will lose when the contract expires. The Brandeis Center also said ending the contract would harm AQP-sponsored coexistence programs and prevent Palestinians from accessing Ben & Jerry’s products.

The center noted that after Unilever said it would not sell in the “occupied Palestinian territory” but would continue to sell in Israel “through a different arrangement”, the board of Ben & Jerry’s rejected the statement, implying that the board is aiming for a full boycott of Israel.

Unilever said that because of its unique ownership arrangement with Ben & Jerry’s board of directors, the conglomerate lacks the ability to influence the ice cream maker’s “independent” business decisions.

Unilever CEO Alan Jope said his company had agreed to “recognize the right of the brand and its independent board to make decisions in accordance with its social mission”. On this decision, it was no different.

He distanced Unilever from the Boycott, Divestment and Sanctions (BDS) movement against Israel and said he supported doing business in Israel proper. 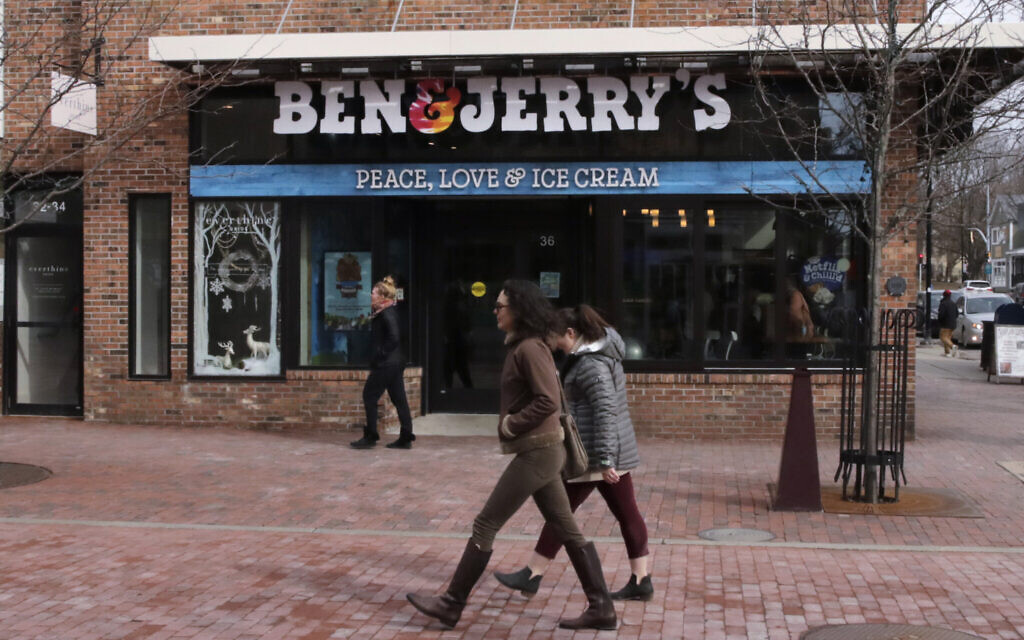 The Ben & Jerry’s boycott in the West Bank caused a headache for Unilever and severe repercussions. At least six US states withdrew a total of hundreds of millions of dollars from Unilever because the move violated anti-boycott laws. Shares of the company have fallen nearly 20% since the announcement, while the broader market hasn’t budged much.

Critics of the West Bank boycott note that Ben & Jerry’s sells products to states with abysmal human rights records, including Russia, Saudi Arabia, Syria, Iran and China. The company also sells in other disputed territories, including Tibet, Crimea, Western Sahara and Kashmir. Unilever continues to sell other products in the West Bank.

The company did not criticize Russia’s invasion of Ukraine or take any action against Russia, although it did criticize the United States for sending troops to NATO allies before the war.

BDS supporters say that by urging businesses, artists and universities to sever ties with Israel, they are using nonviolent means to oppose unjust policies toward Palestinians. Israel says the movement masks its motives to delegitimize or destroy the Jewish state.

Zinger, an Israeli, is the first and only Israeli licensee for Ben & Jerry’s. He discovered Ben & Jerry’s in the mid-1980s, when it was a small business, and visited founder Ben Cohen at his home in Vermont to make a business deal. Zinger spent time in Vermont learning how to make ice cream and started his business in Israel with an ice cream parlor in Tel Aviv in 1987. His business now sells to supermarket chains, convenience stores and operates two parlors.

Ben & Jerry’s merged with Unilever in 2000. AQP, Ben & Jerry’s and Unilever signed an agreement in 2004 granting the Israeli company the license to manufacture, sell and distribute the ice cream in Israel and the West Bank.

Ben & Jerry’s and Unilever had promised to extend the deal after it expires at the end of this year. The company had long been under pressure from the BDS movement to stop sales to Israel, which escalated during the May 2021 war between Israel and the terror group Hamas. Ben & Jerry’s abruptly broke its insurance on July 19, 2021, after the war, with his announcement that it would stop selling in the disputed territories.

Bennett Cohen and Jerry Greenfield, the company’s Jewish founders, have no control over its operations but said last year they supported Israel but opposed its “illegal occupation” of the West Bank.

The 2.3 million square feet of office rentals reported in January was well below the 2019 monthly average of about 3.6 million square feet for commercial buildings in the city, according to data from Colliers. “We believe your team has built a portfolio of high-quality properties,” Monarch co-founder Adam Sklar wrote in a letter to […]

GameStop shares jumped in extended trading on Thursday after the company announced it plans to implement a stock split. The video game retailer said it would seek shareholder approval at its next shareholder meeting for an increase in the number of Class A ordinary shares from 300,000,000 to 1,000,000,000 to partially proceed with a stock […]

The company is challenged on its position on antibiotics, well-being March 28, 2022 2 minute read One of investor Carl Icahn’s director nominees at McDonald’s Corp said she would push the burger giant to tackle sustainability issues such as reducing the environmental impact of farming and reducing antibiotic use, Reuters reported. So far, Icahn, the […]