In his exhibition “Images on which to build”, the curator gives an overview of underground archival imagery from the 1970s-1990s

In today’s image-saturated society, the power of photography – its ability to capture culture and history – often slips through the cracks. Writer, curator and photographer Ariel Goldberg’s latest exhibition is a long-awaited necessity, breaking the normative standard of art-historical Eurocentrism. their show, Images to build on“presents the processes of trans and queer image cultures that have created spaces beyond the visual, where experiences of affirmation, recognition and connection have formed legacies that shape our present and our future.”

In their presentation for the 2022 edition Biennial FotoFocus, Goldberg presents diverse art forms from a queer and feminist perspective. But rather than being relegated to a place explicitly centered on queer or feminist art, Pictures is exhibited at the Cincinatti Center for Contemporary Art, a sign of a broader institutional change. It’s exhilarating to see the archives together, and heartbreaking to see the extent of what was missing.

Goldberg organizes Pictures in six sections: Joan E. Biren’s (JEB) The dam showLola Flash’s In and alongside Positive ART+by Diana Solis Intimacies in ResistanceKeepin’ On’s Images of African American lesbiansElectric blanket AIDS projection projectand Little Gem’s Trans Image Network. Magazines, portraits, newsletters, snapshots and poetry present a small fragment of the liberation movement from the 70s to the 90s: three decades once almost lost from collective memory. The exhibition captures the happiness of gay people when they live freely and the agony when they desperately cry out for community or when the little one they have is dying.

The curator led a conversation between JEB, Flash, Solís and Shawn(ta) Smith Cruz, the co-coordinator of the Lesbian Herstory Archives. JEB and Flash were unaware of Solís, and neither was Solís, although they had all spent the majority practicing their craft in Synchronicity. Smith Cruz recalled the time she met the archive collective, revealing that its members disagreed on everything, except for the idea that there were no black lesbians in the 70s. This is far from true, but there was little public documentation to prove otherwise. Thoughts like these easily become “facts” until projects like Goldberg’s see the light of day, revealing hidden communities.

I came across JEB afterwards. She was sitting in the gallery, watching everyone who passed. She was still getting used to people staring The dam show, as before, only viewers were lesbians. Now it’s open to a new audience, an audience full of straight men. JEB wasn’t even sure if they knew what they were looking at, amazed at how long they stayed in front of the screen. I asked, “Why did it take so long?” She replied, “That’s not why, because I know Why. It is a miracle that this happened.

Madison Bubbles: When did you first become interested in the practice of discovering history and making it public?

Ariel Goldberg: I felt like my life depended on finding what was missing in trans and queer photographic activity. I knew there had to be more than was readily available, and there is! I have met, in my research, an infinity of people carrying out work of all kinds. 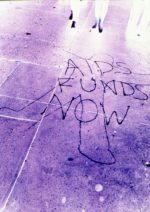 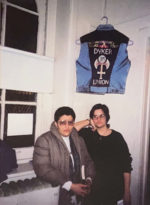 Right: Lola Flash, AIDS Funding Now (1989.) Image by This versus this slideshow with 134 looping images. Courtesy of the ART+Positive Archives, collection of Dr. Daniel S. Berger.

i don’t think i am discovery anything; I’m trying to decolonize my logic around it. A lot of people have done amazing work, and it’s under-recognized. It is more about listening, reading and joining the artists, educators and activists who have participated in the constant work of the liberation project in different forms. If people of my generation don’t talk to people of older generations, valuable, beautiful, embodied, powerful and transformative knowledge will be forgotten. While preparing for the exhibition, I realized that I wanted to create an experience for people to be, like, Wow, there were so many. We are told that there are so few for this period – just Robert Mapplethorpe or Catherine Opie – but there were dozens of other works that never reached the so-called discourse on art.

Madison: Have you tried to find your own story?

Arielle: Absolutely. I found leads, like little seeds. I read an article by curator Sophie Hackett in Opening who was talking about JEB The dam show. From there I looked for JEB. Black-smith [College] acquired her papers, and spent six weeks at the Sophia Smith Collection, researching Diana Davies, lesbian periodicals, and visiting the Sexual Minority Archives. JEB was at the center of many literary, film and musical cultural activities in the 1970s, as she was part of two different lesbian collectives; Moonforce Media and The Furies. JEB’s papers gave me the names. Once I found one person, I was inundated with more. I still can’t follow. I have lists of archivists, photographers and activists I want to have conversations with.

“People will have their experiences, and I welcome any way people deal with this material. I don’t think it’s about representation or education; I want to move people.

Madison: Why did you choose to focus on the work of JEB, Lola and Diana, alongside the other archives?

Arielle: JEB, Lola, Diana and Shawn(ta) from Lesbian Herstory Archives were the people who got to participate in the FotoFocus symposium, and that conversation is the foundation of the show. They are all gay women or gender non-conforming people. I also center black and brown women; JEB is white, but has a strong anti-racist ethos in her image-making practice. I wanted to honor the work of Diana, Lola and JEB together. One of my goals is to zoom out and examine the image cultures that occurred in the United States in the 1970s-1990s. The six projects of Pictures are shows within a show. With JEB, Diana and Lola, in particular, I wanted to approach different geographies. JEB was based in DC but traveled with The dam show. Lola’s work is in New York and London. Diana’s work reflects her worlds in Chicago and Mexico City; she has defied state lines all her life.

Madison: Do you consider this show as a form of representation or education?

Arielle: The show can be anything and everything. People will have their experiences, and I welcome all the ways people deal with this material. I don’t think it’s about representation or education; I want to move people. Personally, I am less enthusiastic about the concept of representation, because I find that it does not go far enough to implement structural change. I tend to seek and question all that is not visible in the photograph – but I also delight in what is made visible. The unifying factor of all these projects is that they are now educational, and they were intended to be at the time they were made. What I try to capture in the energy of the work is that people are erased.

A passerby sees a sign that says ‘Keep the cops out of gay bars’, like Diana’s [Solí’s] photo, and they start to think differently. Lola [Flash’s] the work is about sex positivity and does the opposite of what the Christian right did at the start of the HIV/AIDS crisis. It was like, ‘Oh, are you afraid of nudity? Well, we’re a group of friends and we’re going to take naked pictures because our friends are dying and we’re trying to live. These are the documents we have to learn from. I like to think of this as a circular loop.

Great Fury, Kissing doesn’t kill… (1989.) Image by This versus this slideshow with 134 looping images. Courtesy of the ART+Positive Archives, collection of Dr. Daniel S. Berger.

Madison: How do you think queer and trans photography has changed since the time of the exhibition?

Arielle: Everything always changes, but things also move slowly. It’s a bit of a push and pull. JEB likes to think of photography as a triangle, where the photographer, the subject – what she calls the muse – and the public are at the three points. The thing that has changed most dramatically, in terms of this interaction triangle, is the audience. The number of cameras in people’s hands today has increased dramatically. Now, the public is also the photographers.

Being a photographer in trans and queer spaces used to require a very specialized skill. Not everyone had the equipment or the training to take pictures. Either people built their own darkrooms to make images because they couldn’t take them to photo labs; or they took the risk [when they did]. At the end of the 20th century, the average trans person might have had a compact camera and made awkward self-portraits or asked their friends to take pictures. Now we are inundated. A trans person can take a selfie five times a day and send it to their friends or post it on social media. When trans people wrote letters to each other in the 80s, one line that kept getting repeated was that they “felt like the only ones”. They were totally isolated and out of sheer survival, creating support groups to escape this feeling. Today, more people have resources to build communities.

Images on which to build, 1970s-1990s is on display at the Cincinnati Center for Contemporary Art through February 12, as part of FotoFocus 22: Biennial: World record. March 10, Pictures will move to the Leslie-Lohman Museum of Art, where they will be on display until June 30.

Madison, WI – On September 22, Community Shares of Wisconsin (CSW) will honor local leaders and organizations that are advancing social and environmental justice in our community. The annual Community Change-Maker Awards event will take place at Union South and online. The public is invited to attend the event. Tickets purchased to support this event […]

Frank Gottie had known Jeremiah Taylor for 8 years and both worked to heal their community from rising gun violence. MEMPHIS, Tenn. –The man who tended the Young Dolph memorial in Makeda’s Cookies daily was shot and killed last Friday. A close friend is now talking about his positive influence. He was dedicated to honoring […]